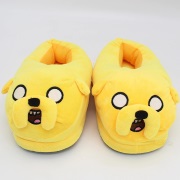 Adventure Time first premiered on April 5, 2010 and is based on the adventures of a boy named Finn and his adopted brother (as well as his best friend) Jake. Jake has the magical power to change his shape and size at will. Jake and Finn live in the Land of Ooo (post-apocalyptic setting). There are various main characters which reappear during the show such as Princess Bubblegum, The Ice King, and Marceline the Vampire Queen.

Among the many interesting things about the show, it is worth noting that the show is created using hand-drawn animation. Using storyboarding, each episode takes about 8 to 9 months to complete. Due to the nature of such production, various episodes are in-production simultaneously.

Another thing to note is that although the show was primarily catered towards children, it's gotten quite a following among tennagers and adults, largely in part to its witty humour and overall enjoyment factor. Adventure Time has won several awards during while gaining great ratings alongside.